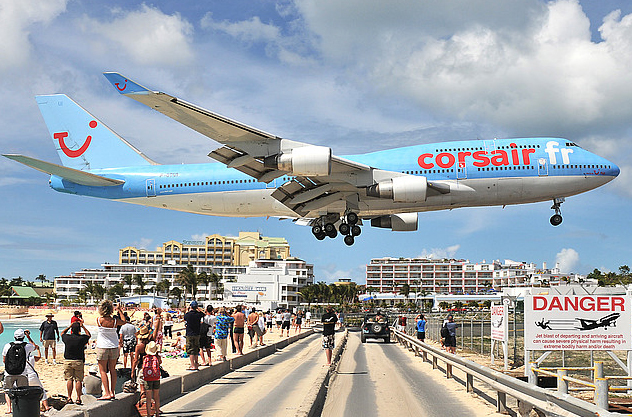 Princess Juliana International Airport – St. Maarten
The length of the runway, which is just 7,152 feet, is perfectly fine for small or medium jets, but as the second busiest airport in the Eastern Caribbean, it welcomes heavy aircraft like Boeings and Airbuses on a regular basis. The scary part is that they fly incredibly low over Maho Beach and skim just over the perimeter fence.

Toncontin Airport – Tegucigalpa, Honduras
Pilots must fly through mountainous terrain and then execute a dramatic 45-degree last-minute bank to the left just minutes before touching down in a valley with a runway of just 6,112 feet.

Gibraltar Airport – Gibraltar
This airport’s runway stretches just 6,000 feet, with the Mediterranean on one side and the Bay of Gibraltar on the other. When pilots hit the tarmac they must quickly and fully engage the auto-brakes, and as nerve-wracking as the landing can be, it’s never guaranteed!

Madeira Airport – Funchal
Wedged in between the mountains and the Atlantic Ocean, this airport requires a clockwise approach for which pilots are specially trained. The runway is a hair-raising affair that pilots absolutely dread! They must first point their aircraft at the mountains and at the last minute, bank right to align with the runway.

Juancho E. Yrauspuin Airport – Saba
Perched in a peninsula on the island is this airport’s runway. Pilots must tackle gale-force winds as they maneuver for a perfect landing, there’s no room for error on a tiny 1,300 foot runway.

Kai Tak Airport – Hong Kong
Although it closed in 1998, this famous urban airport will go down in history as one of the scariest of all times. Planes would practically graze skyscrapers and jagged mountains as they took off and landed on a single runway.

Barra Airport – Barra, Scotland
Have you ever landed on a beach? Well the airport on the tiny island of Barra is actually a wide shallow bay onto which scheduled planes land. The roughness of the landings is determined by how the tide goes out to sea. 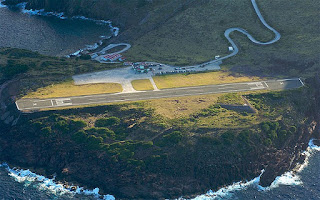 Tenzing-Hillary Airport – Lukla, Nepal
This airport not only has one of the steepest uphill runways in the world, but its drop-off into the Himalayan valley below is sure to give you a heart attack.

Courchevel – France
This airport is famous for its super-short ski slope runway, which is punctuated with a vertical mountainside drop. Ice and unpredictable winds are always a concern for pilots who must meet training requirements before being able to land in this winter wonderland.

Tioman Island – Malaysia
Landing on this volcanic South China Sea isle has et many a pilot’s and passenger’s hair on end. Its approach, directly into a mountain with a 90-degree turn to align with the runway ends short with a cliff – if you don’t jam the brakes, you’re a goner!

Reagan National Airport – Washington, D.C.
Located smack in the middle of two overlapping air-exclusion zones, Reagan National requires pilots to follow the Potomac while steering clear of sensitive sites like the Pentagon and the CIA headquarters before making a steep turn and landing. Taking off also requires pilots to climb quickly and avoid flying over the White House.

These terrifying airport runways are enough to make you take the train – or never fly again!

Need a shuttle service to and from Cape Town International Airport? Contact Airport Shuttle and we can get you where you need to be!
Posted by Christine