The World’s Most Unusual Streets 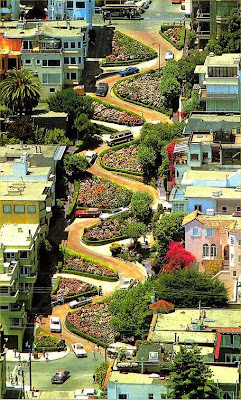 If you think the streets and road signs here in the Mother City are confusing, you are mistaken. There are many, many other streets in the world that are incredibly strange and may cause traffic hold-ups. Here are 5 of the most unusual streets in the world…

Lombard Street, San Francisco
If you are a professional race car driver – stay away from Lombard Street in San Francisco! The start of this weird street consists of 7 hairpin turns situated only a few hundred metres away from each other. The road was built in this way to make it a bit less steep for transport to drive through safely. It is called the most crooked street in the world.

The Magic Roundabout, UK
Driving always needs to be safe. Nevertheless, from time to time we face difficulties on the road. One of the most unique junctions in the world is in Swindon, it consists of 5 roundabouts that almost resembles a maze that drivers have to solve. The worst part of all of this is that drivers must ride the central roundabout in the opposite direction to the smaller roundabout. This is truly a hellish place for skilled drivers and a total nightmare for learners.

Yonge Street, Canada
The longest street in the world is located in Canada. It is about 1,178 miles long and the project is called an event of National Historic Significance. The street was actually included in the Guinness Book, however, in the 1990s some changes were made and the street was excluded from the book. No matter, people still consider it to be the longest street.

9 de Julio, Buenos Aires
The widest street in the world is in Buenos Aires and it is made up of 9 lanes. It takes about 300 feet for pedestrians to cross the road to get to the opposite side. The middle part of the street is actually decorated with stunning gardens, squares and monuments.

Putrajaya, Malaysia
Can you imagine a roundabout with a huge forest in the middle? Well, such a place exists in Malaysia. There is no other roundabout in the world that is as large as this one! It is almost 2.11 miles around and is next to another tourist destination, the Malaysian Prime Minister’s office.

Have a look at these strange streets around the world and maybe you will get curious enough to have a trip to go and see the with your own eyes!

Contact 808 Cartwright for a reliable, affordable, self-catering apartment in the Mother City. Need a shuttle service to and from Cape Town International Airport? Give Airport Shuttle a call today!