You have two choices, either sit in the middle seat of a long flight, or drill a hole in your head. Which do you pick? 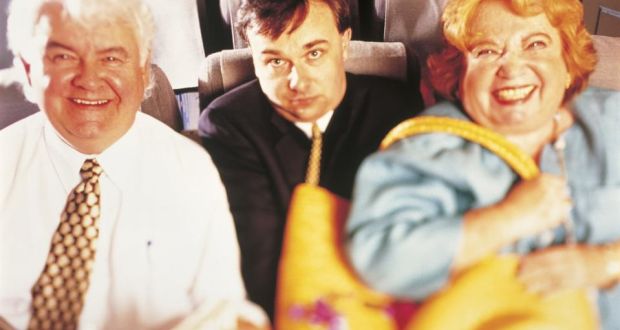 A recent survey was done to determine the top five middle seat annoyances:

1. Having a nosy seatmate looking over your shoulder
2. Falling over someone to get to the bathroom
3. Not being able to stretch out
4. Having an overweight seatmate on either side of you
5. Not having a place to rest your head

Here are 5 top tips to avoid as well as survive the middle seat:

Make a narrow escape – Your first chance to escape the middle seat is to select an aisle or window when your first book your flight, however some airlines charge an additional fee, but it’s definitely worth it!

Use the armrests – Travelers often get confused about proper armrest etiquette, there is a rule of thumb that has worked for many people over the years: the person in the middle seat has priority when it comes to the armrests on both sides. It’s only fair!

Go before you go – If there was ever a time to behave like a four year old and visit the bathroom multiple times in the airport before your flight, this is it! And if you do ever have to get up from your seat during the flight do it before the person starts watching a movie, reading a book or sleeping.

Use sleep and comfort aids – No, I don’t mean drugs, but rather neck pillows, eye covers, noise cancelling headphones or anything else that can make it possible for you to sleep or rest while sitting straight with nothing to lean on.

Just give in – If you do end up in the dreaded middle seat, it will help if you just accept early that it’s not going be fun, easy or comfortable, so you might as well make the best of it! It’s going to be horrible, but sooner or later you will be on the ground. In other words: this too shall pass.

People dislike the middle seat so much that they will go to great lengths to avoid it! It’s true that majority of us would rather go to the dentist than have to tell a seatmate that you have to go to the bathroom.

Avoid the middle seat completely and book your shuttle service with Airport Shuttle in Cape Town or Durban today!
Posted by Christine No comments: