10 Things we no longer see in flight!

Travelling by airplane is really different than how it used to be back in the day! And that’s not only including all the crazy and elaborate security restrictions that get added every time some psycho sticks a bomb on a plane. There used to be a lot of different amenities that gradually disappeared over time, because of costs etc. 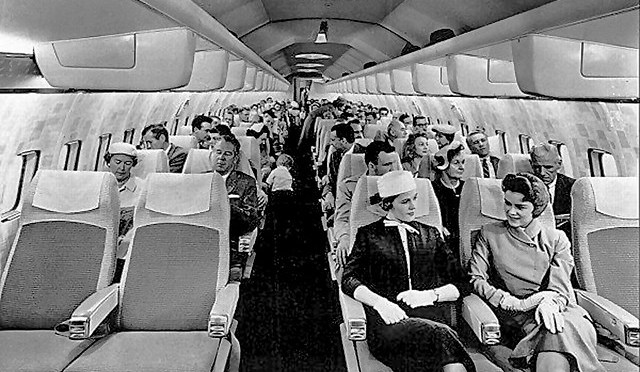 1. SLEEPING BERTHS
In the late 1940s, the Boeing Stratocruiser had a beautifully appointed ladies’ lounge and reclining springy chairs plus each chair in the main cabin (not just First Class) could be adjusted and manipulated to form enough sleeping berths for each passenger.

2. PONG
In the early 1980s, Continental Airlines outfitted some of their DC-10s with what they called a “Pub” configuration. Besides a walk-up wet bar with circular tables and swivel chairs, the Pub area also had a two-player Pong game

3. CHAMPAGNE IN COACH
Southern Airways offered champagne to every passenger back in the 1970s. The company probably needed all that booze and poufy pillows to take the edge off of its multi-stop routes!

4. TABLE-SIDE MEAT CARVING
Pan Am’s 707 Clippers used to offer restaurant-quality meals to customers. Even better, the meals were served seat side by an on-board chef on their Trans-Atlantic flights.

5. PIANOS
American Airlines featured a piano lounge in the rear of their 747s back in the 1970s. The instrument requires frequent repairs because of over-enthusiasts music lovers spilling their cocktails on the keys. What could be more relaxing on a flight than a bunch of intoxicated folks singing and playing the piano off-key?

6. FLIGHT ATTENDANTS IN HOT PANTS
Some changes are simply for the better!

7. FRESH CUT FLOWER ARRANGEMENTS
Pan Am’s 707 Clipper had fresh flower arrangements on every tray table and didn’t have to worry about the contents being spilled because the airplane was advertised as being “vibration free.”

8. IN-FLIGHT FASHION SHOWS
In 1965, flight attendants welcomed passengers aboard on one outfit, then changed to another for the meal service, and then into something else for the other portions of the flight.

9. WINDOW AT THE END OF EACH ROW OF SEATS
In the good ol’ days, the standard seat pitch in the Economy Class was 34 inches, but today the average is closer to 31 inches. Once an airline buys a craft, they’re free to configure the seats inside however they please, and these days that means “crowded”.

10. A SEAT ASSIGNMENT IN 22I
Or any row with an “I” designation. Watch the seat numbers the next time you’re on a plane – they usually run “HJK.” Why is there no “I”? Blame computers.

Need a ride to or from Cape Town International Airport? Contact Airport Shuttle today and book a taxi quickly and easily!
Posted by Christine