Strange things that have happened at the airport

Millions of people pass through airports every year, and a few of these experiences are bound to be a bit unconventional. With the madness of the airports themselves, it’s not really a surprise that strange things happen.

Let’s take a look at a few of the most bizarre things to happen at the airport.

Radioactive Woman
The threat of terrorism has become part of daily life and airports are naturally high profile targets. Technology plays a big part in countering this effect, but incorrect results aren’t uncommon. One case involved a woman who managed to shut down a whole terminal when she triggered a radiation alarm. Yes, it would have been a cool story if she has been a 50m tall radioactive woman with crazy powers; in reality she has recently taken the isotope Iodine-131 as part of her cancer treatment.

Lounge Bare Essentials
Anyone who has spent time in an airport lounge will know that feeling when the remote control has vanished, forcing everyone to watch the CNN updates. It’s clearly impossible to please all of the people, all of the time when it comes to TV programming. However, in 2005, someone in New Delhi airport made this task even more difficult by screening 20 minutes’ worth of pornography on several screens in the visitor lounge.

Did you Pack the Case Yourself?
The staff at the airport are used to most tricks pulled by passengers trying to get around hand luggage restrictions and fees. Agents at Bromma airport in Sweden discovered that the extra weight of a checked bag was actually a dwarf. Apparently it was just a prank, so the airport didn’t press charges, but they failed to see the funny side.

And Then I Woke Up in…
Have you ever woken up in a strange place after a heavy night of drinking, like a dumpster, the street or a hospital? Well a traveler decided to sleep in the airport the night before his morning flight, but unlike most people he was totally wasted when he made this decision. The quiet, welcoming spot he chose to sleep on turned out to be the baggage belt, and when the system started in the morning, the drunk man went in and his happy journey came to an end when the security staff spotted him going through the X-ray machine.

Sir, You Need to Change your Diet
Gold smuggling is popular in India due to high import duties, and criminals have tried everything to trick customs. Unfortunately one man who arrived at Goa airport got caught out when a body cavity search revealed six gold bars in his rectum! Whether the bars had to be extracted manually, or nature took its painful course is unknown. 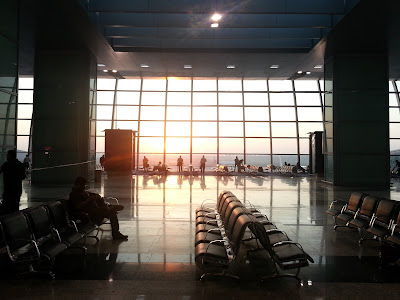